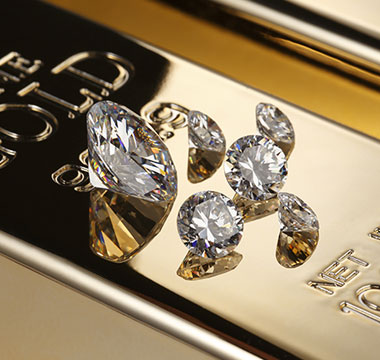 What is the difference between the two?

Gold is the oldest, non-agrarian traded commodity in the world. Gold does not corrode, decay, oxidize or degrade. That’s why it makes such great sunken treasure. Knock off the crustaceans and it looks just like it did when it was minted!

You might also think about gold being the ultimate recyclable material. The very ring you are wearing right now could contain gold that was mined thousands of years ago. Maybe King Tut or one of his wives wore that gold around a royal wrist.

In ancient times, when you went to the market to buy gold jewelry, the trader would take the seeds from the pod of the carob tree and use those as a counterweight against the weight of the gold he was going to use to make your ring. These seeds were very uniform in weight and size and were used throughout the ancient world as the counterweight for small items. They were certainly used to weigh other small, rare and costly substances such as incense, frankincense and myrrh – some of the most valued items in the ancient world. The amount of gold it took to make a man’s ring back then was roughly 24 carob seeds. Hence, 24 karat being the standard expression of pure gold.

Gold is very hard to work with when it’s right out of the ground. It is flakey, brittle and really too soft to be worn every day. Even countries like the Middle East who really favor the color of high karat gold still alloy their gold to 22 karat. It just makes it easier to work with when you are making jewelry items.

Gold is rare and expensive… that’s also why you see other diluted quantities of gold: 10K, 14K and 18K. In Europe, especially Britain, the jewelry industry uses odd numbers to denote the quantity of gold content. When a ring is stamped “10k” it means that 42 percent of the total volume of that piece of jewelry is 24k gold; the rest is alloy. “14k” means the total volume is 58 percent and “18k” means 75 percent is gold; the rest is alloy.

The word carat came about in the mid-1500s when alchemists were experimenting with different materials attempting to turn them into gold. Also, because of this culture of experimentation, artisans were learning how to facet stones, especially diamonds. The term became adopted to denote the weight of stones, just as 24 became the standard of quality for pure gold.